This year’s trip to Highland Lodge was little different to many others – great fishing, character building cold weather, lovely scenery. Highland Lodge for those who don’t know the place, is midway between Molteno and Dordrecht in the Eastern Cape Highlands at an altitude of around 5 500 feet asl.

A typical Highland Lodge rainbow. Note the excellent condition of this fish of around 4 to 5 pounds . Fish of this size and quality were common.

The road up from Cape Town was uneventful, save for snow-capped mountains near Graaff-Reinet in the arid Karoo.

We arrived near dark when the temperature was a cold -16 degrees and where it hovered most nights we were there. In the mornings it rose to around -2° and in that late afternoon it would start to drop towards freezing from around 4.30. When temperatures start plummeting all sorts of things happen – your fly line sticks in the guides, ferrules freeze over and are hard to get apart.

One particularly cold afternoon Chris Bladen’s landing net froze solid as a witch’s hat and Darryl Lampert’s waders froze around his legs. The meat we had taken out of the fridge to thaw that morning for a braai was frozen solid to the kitchen table when we got back and Chris Bladen forgot to keep his beers in the fridge and had to thaw them out under hot water.

Most mornings we were on the water around 10.00, had lunch on the bank of whatever lake we were on, interspersed with hot coffee during the day. Mainly we were off the water just as the sun was setting.

The lodge is comfortable with a great fireplace and plenty of wood. We needed it. 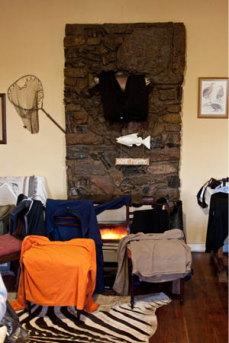 There is also a neat anthracite stove that we made good use of to dry out wet gear.

After one particularly cold night my truck hardly made it up the road with the accelerator flat on the floor boards. It turned out the diesel had frozen in the fuel tank. I’d sketched a Zak in the ice on the back window just before we headed out that day.

We stored float tubes inside to prevent them from freezing solid overnight and on the occasional day when we got a little rain, or in the evenings, we tied flies to add to the more than enough we already had. But that’s part of any trip I guess. 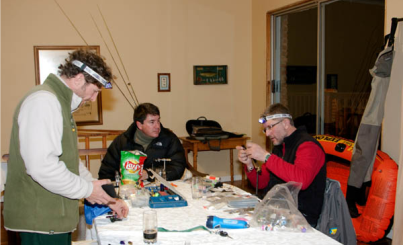 Clothing here is important, no matter what time of the year you choose to fish. Starting at the head you need a really warm beanie with a scarf or a fleece buff around your neck. Under your shirt you want a long sleeved thermal vest (maybe two) and over it, a warm fleece jacket. When the wind howls the chill factor takes off and a wind resistant jacket is vital. On your legs you want two pairs of arctic condition socks, long John thermal underwear, then Simms fleece pants (they saved my life) over your regular fishing pants and finally your waders. Simms ‘Wind Stopper’ half finger gloves were essential and one of the best bits of kit I ever bought. You need easy fitting, zip up neoprene booties over your waders to make the connection with your flippers more comfortable and solid.

I used an anchor (essential gear) that when detached from the float tube had a brightly coloured float on the end of the rope so that I could return after landing my fish and connect to it again with ease. Fleece pants, Wind Stopper gloves and anchor I purchesed from Frontier Fly Fishing in Johannesburg who understand the 'extreme' stillwater scene and all the madness that goes with it as well as any outfitter I know.

Water temperatures were mighty cold. Measurements in two different dams at around 11.00 am were 5 and 8 degrees Celsius respectively, so as you would imagine there was little surface activity. Over the years I've noticed that in stillwaters fish become active on the surface at around 11 degrees and upwards to an optimal of 16 degrees. Most mornings the shallows were iced over from the shoreline for a metre or two.

Mostly we were on intermediate fly lines, fishing 9 foot leaders connected to short tippets of fluorocarbon down to 3X. I was using my favourite stillwater fly line, a Sci-Angler floater in pale green with a clear intermediate tip.

Occasionally I went to the floater. I think we were all on 5 or 6 weight rigs. I had a William Joseph chest pack on that took my flie box, spare spools, stomach pump, lip ice, scissors and floatants with room to spare. Its magnetic closures were heaven to use (simple, quick, no hassle) as opposed to the clawing hold of Velcro, so omnipresent these days.

There wasn’t a day we came near to blanking. In fact most days we had between 20 and 30 bif fish. Most of our trout were between 3 to 6 pounds, but we landed a few I guess up to around 8 pounds. I pumped the stomachs on a number of trout. They were eating copious numbers of small (size 14), glass-olive coloured mayfly nymphs, small pale-olive damsels and pale-green chironomid larva. I found no blood worms and no dragon fly nymphs in the all the samples I took this year.

Typical mid-depth hook up point. Note the proximity to the shoreline.

Casts were productive in mid-depth water mostly, with patterns fished on a slow, jerky retrieve. We found places in the lakes, mostly just off the shoreline, where the fish were holding in pods and where we could take upwards of half a dozen big rainbows in an hour’s fishing from roughly the same spot.

Chris Bladen with a fish from Spurwing

The lakes are mainly weeded along the shorelines, but here and there we found places where the water could comfortably be fished from the bank, especially on a magnificent lake called Spurwing. 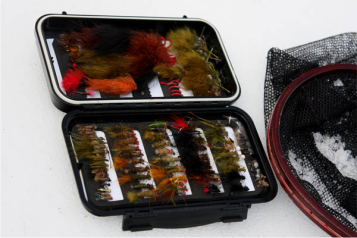 The most successful patterns, as you would imagine on large lakes in the cold months, were attractors, variations on Woolly Buggers mainly, but even more successful were olive strip leaches with a blood red tungsten bead.

Chris and I took a couple of fish on a size 12 Blood Worm imitation fished 9 feet under a DDD, but the rig was no match for the attractor patterns. As the water warms towards October/November imitative patterns (damsels, mayfly nymphs, dragons, dry flies such as the DDD and Kauffman's Stimulator, and midge larva and pupa [buzzer] imitations) will come into their own more and more.You will do well fishing these on a long leader (>15') off a floating line.

Why fish here in mid-winter?

No good reason other than that the water is clearer and the fish are still in bright spawning colours, which are both ideal for underwater photography.

Photography plays a big part in the lives of all of us who were on this particular visit to Highland Lodge. As you will read below our scope was clipped somewhat when top end three lenses and two very high end SLR cameras were soaked, but we still all managed a few good shots - at least good for the amateurs we are.

My bright orange 'camera caddie' christened 'Worms 4 sale' , proved too big and bulky, but the concept is a good one. Note the neat William Joseph chest pack. Photos per Chris Bladen

The big secret to stillwater photography is to be able to have your cameras near at hand, but at the same time dry and in no risk of getting wet when you are out in a float tube with limited space. I hit on the idea of having a second inflatable craft tied to the side of my float tube where I stored my cameras in water tight pouches. It worked, but the craft I had (all of R90 worth from a local supermarket) was too big and offered too much wind resistance. I will be looking for a much smaller, inflatable kiddies craft to replace it, but the concept has great merit, both from a picture convenience point of view as well as camera and lens safety. It also makes convenient storage for rain jackets, lunch boxes and a hot coffee or soup thermos. I had three Canon SLRs in the boat, one in a Ewa Marine underwater housing, one with an ultra wide angle lens attached and one with the crystal sharp, Canon 70-200 mm lens on it.

This shot of Owl Dam from the lodge was taken at around 10.00 pm on a moonlit night

We tried some star trail shots, but contending with a full moon was too much. For star trail pictures to work out well you need a pitch black sky and no nearby source of light. Settings used here were: Camera set to Bulb exposure, image stabiliser off, focusing distance set at just a fraction less than infinity with the auto focus off, ISO 400, f8, exposure time 4 minutes with the camera on a tripod using a cable release.

Despite precautions, Gerrit Redpath and Darryl both dunked a camera and lenses. We used the oven to thaw them out. Not the best idea we later discovered. At least, not with high end lenses which have oil in their moving parts. A better solution is to put the lens or camera in uncooked rice surrounded by as many silica sachets as you can find and leave it there until you get back.