I just wanted to share some feedback on a trip to Highland Lodge last week, as I know that you will be heading that way soon. 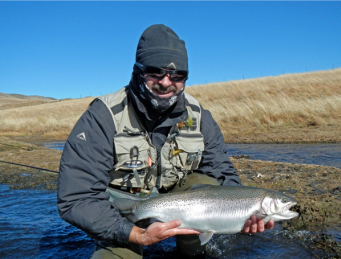 The best fishing was at Bernards Dam and Spurwing Dam. We fished Syds one of the afternoons, but not a take.

Of the four days fished two were slow due a glacial front that hit on Sunday.

The wind was never under 25km/h NNW and most mornings were sub-zero.

I also got to use the Rio - Hover for the first time. It was awesome knowing that you could cast out into/over the weeds with that slow sink rate. When retrieving you can also picture the fly at this super slow speed - sort of maximized fly exposure time with minimum snagging on the weeds. Most of the fishing we did was wading in or on the edge due to the wind; to me this is where the true pleasure of the Hover line come in.

Anyhow, it was awesome to see the fish in perfect condition again at Highland Lodge.