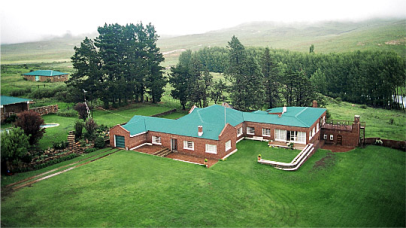 Though not unheard of, trout over five pounds are rare in our rivers, just rare enough to be the sort of trophy you might hope to catch no more than once or twice in a lifetime, unless you are fishing in places like Alaska or New Zealand. Here in South Africa when we need a big-trout fix we turn to lakes, and then to a few really special lakes, that over the years have built up a solid reputation for producing real hogs.

There are a few such spots in the greater Dullstroom area and in the foothills of the KwaZulu-Natal Drakensberg, but my favourite place for this kind of fishing is the Eastern Cape Highlands, specifically a series of high-altitude lakes at a place called Highland Lodge. We’ve been going up to Highland Lodge for more years than I can exactly recall, but what I can say for certain is there was never a trip when we didn’t catch a few real lunkers. I say ‘we’, meaning myself and a few friends who seem to have remained pretty constant, a bunch of like-minded disciples devoted to the annual Highland Lodge pilgrimage where it’s a given you’ll fish hard, get cold, suffer dubious cooking, won’t catch that many fish, but just often enough will hook into a real bus that will tow you around and make your day. We love the place for all these reasons.

Just to put you on the map, Highland Lodge is in the Stormberg mountains roughly 15 kilometres off the R56 highway, midway between the towns of Dordrecht and Molteno. It’s a working farm owned by Luke and Vicky Bell, and has a separate, large, rambling farmhouse that serves as a lodge with all the mod-cons.

Booked in as fishing guests, you’ll have access to 11 lakes all a short drive from the farmhouse. The lakes vary in size from smallish impoundments to very large stretches of water, and in all of them there’s the chance of landing a huge rainbow or brown trout.

Scottish author John Buchan wrote, ‘The charm of fishing is that it is the pursuit of what is elusive but attainable, a perpetual series of occasions for hope’. Well, in a way that sums up the attraction of a place like Highland Lodge, in that we fish these waters in a perpetual state of high anticipation. We spend days floating over clear water in our kick boats, going through the same routines time and time again.

Long casts whistle from our rods, we wait long moments for our flies to sink, patiently retrieve them, then lift the rod and cast again.

Some people would call it monotonous, and up to a point it is, but the monotony makes the sudden, visceral jolt of a big fish somehow all the more exquisite. Your heart leaps, the rod bends deeply, and you feel the first burst of speed as the fish accelerates like Usain Bolt out of the starting blocks. Often the trout will leap clear of the water like big silver arrows, but for the rest they’ll keep pulling with incredible power, and boring deeper and deeper. The fight with a trophy is on. This is stillwater flyfishing at its best; this is why we have come yet again to Highland Lodge!